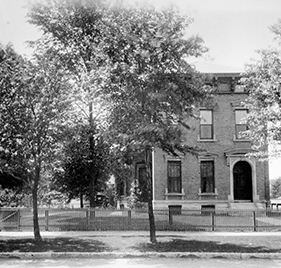 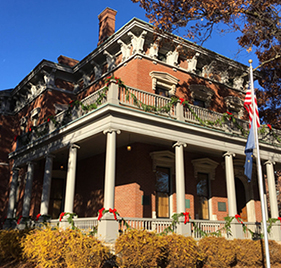 We are a not-for-profit, tax-exempt organization, whose purpose is to maintain and preserve the Harrison home, collections and grounds as a museum and memorial to the only president of the United States elected from Indiana. Open to the public as an educational and historical service, we seek to promote patriotism and citizenship through appropriate educational activities and by artfully exhibiting the Victorian time period as Harrison and his family might have experienced it.

Benjamin and Caroline Harrison built the home in 1874-1875. Benjamin lived in the home until he died in 1901, except for his U.S. Senate and presidential years. His family continued to live in the home until 1913. His second wife, Mary Lord Harrison, made the home a rental property until 1937, when she sold it to the Jordan Conservatory of Music with the understanding that the home and its artifacts would be forever preserved. The school used the home as a dormitory while maintaining certain rooms as presidential museum space.

In 1966, a not-for-profit operating foundation was established to run the home as a historic site open to the public. From the 1950s until 1974, tours were by appointment only. After a 1974 renovation, the entire home was opened as a museum for regular daily tours.

In 2001, we embarked upon an extensive carriage house reconstruction project and the installation of an elevator and elevette that, for the first time, allowed full museum access to all visitors, including those with disabilities. In 2003, the museum earned accreditation by the American Alliance of Museums. In 2006, the museum was awarded a “Save America’s Treasures” matching grant from the National Park Service for site recovery and repair. In 2013, we initiated a successful multi-year Bicentennial grant partnership with the Indiana Statehouse and State Library, enabling Marion and Delaware County 4th grade schoolchildren to visit all three historically significant locations at no cost to the school for admission or transportation.

In 2014, nonprofit veteran, Charlie Hyde, joined the Presidential Site as its new President & CEO. Under his leadership, the organization has set itself a charge to become “the most innovative, impactful and civically-engaged presidential site in the United States within the next 5 years” and developed an ambitious 5-year strategic plan for 2016-2020.

Most recently, we have received national attention for our work to digitize our collection, especially the array of nationally significant 3D. These exciting new efforts are putting the museum at the forefront of a national movement to improve accessibility to new and diverse audiences.

Book Your Tour
Subscribe to eNews
Monday through Saturday 10am to 3:30pm
Sundays 12 to 3:30pm
See Holiday hours
X

** Please note we are CLOSED for our annual cleaning from January 1- 24, 2021. We look forward to seeing you when we reopen on January 25th. Please visit the 'Plan Your Visit' portion of our website to reserve your tickets. Meantime, watch for additional details on our Events page for Coffee with the Curator, The Night Indianapolis Roared, virtual gatherings, quiz nights, new podcasts, curbside engagements, & more!