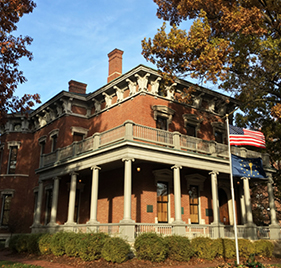 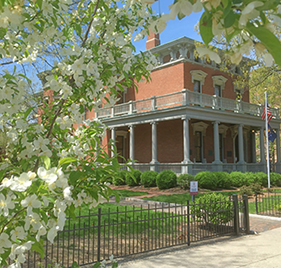 As a successful attorney, Benjamin Harrison purchased a double lot on the west side of North Delaware Street in May 1868. In 1874, he and his wife Caroline began construction of their 16-room Italianate style house, carriage house, brick drive and landscaping. The cost was $24,008.59.

Harrison kept a detailed journal during the construction. Our collection includes records of checks and receipts for purchases toward construction. Except for the periods 1881 to 1887 when Harrison was in the U.S. Senate and 1889 to 1893, the presidential years. Benjamin, Caroline and their two children Russell and Mary lived in the Delaware Street home.

After his presidency in 1893, Harrison returned to Indianapolis a widower. Caroline died in the White House in 1892. Harrison made several changes to the Delaware Street home including the addition of an English-Regency front porch, electricity and updated plumbing.

In 1896, Harrison married his wife’s niece, Mary Lord Dimmick. He and Mary Lord and had a daughter named Elizabeth in 1897.

Harrison died in the home on March 13, 1901. After Harrison’s death, Mary and Elizabeth lived in the home until 1913 when they moved to New York. From 1913 to 1937, the house was rented to various families and eventually became a rooming house.

In 1951, the music school moved to Butler University where it continues to be known as Jordan College. As per their agreement with Mrs. Harrison, the Arthur Jordan Foundation Trustees opened the home to the public. In 1964, the United States Department of Interior named the home a National Historic Landmark. In 1966, the Jordan Foundation created the President Benjamin Harrison Foundation to maintain and operate the home in accordance with the statement of purpose. And in 2003, the museum earned accreditation by the American Association of Museums (AAM). In 2010, the Board of Directors changed the name of the Foundation to the Benjamin Harrison Presidential Site.

The President’s home is part of The Old Northside Neighborhood. The boundaries of this community are 16th Street on the North; Pennsylvania Street on the West; Interstate I-65 on the South; and Bellefontaine Street on the East.

From the time Harrison purchased the empty lot in 1868 until the last room was painted in 1875, his Northside home had cost $29,000. With H. Brandt as the architect and Petrie and Cummings as excavators, the 10,000 square-foot-home, complete with 16 rooms, three stories and a basement, was finished in one year.

Two-feet-thick Indiana limestone made up the basement and 380,550 bricks completed the home. The finest French plate windows were installed along with three conveniences not enjoyed by most Victorians: running water (in the kitchen, washroom and second-floor bathroom), a coal-fed furnace, 23 working gaslight fixtures and 12-foot ceilings.

Water pipe was laid (312 ft.), 86 feet of furnace pipe installed, as well as 12 registers, 670 feet of gas pipe, slate roofing, a coal chute, a laundry stove and a burglar alarm, which consisted of bells and strings attached to the doors.

Outside the home, two soft maples, four sugar maples, one elm and one oak were planted. 153 feet of fencing was built; the pickets of this fence would be taken 13 years later as souvenirs by the crowds that gathered for his traditional campaign speeches.

Benjamin and Caroline Harrison chose everything, from the interior layout to the Italianate red brick design. The original carriage house was also constructed at the same time, with three bays and upstairs quarters for the coachman. The carriage house that stands today was reconstructed in 2001.