Harrison in the News

President Harrison’s legacy continues to influence and shape our country’s conversations. We are happy to share these headlines that feature our 23rd president and the innovative programs of the Benjamin Harrison Presidential Site. Please check back frequently as we update with new and relevant information!

Here are some examples fresh from the headlines in which our 23rd president continues to influence and shape our country’s conversations today: 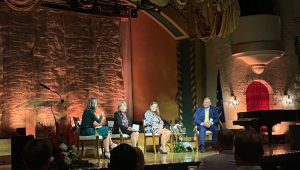 (INDIANA CAPITAL CHRONICLE) Hoosier law experts on Wednesday denounced the May leak of the draft United States Supreme Court decision that in June sent the question of abortion back to states, during an event focused on the nation’s highest court, hosted by the Benjamin Harrison Presidential Site.

27 Fun & Best Things to Do in Indianapolis, Indiana

(VIA TRAVELERS) Indianapolis is located in Marion County and is the state capital of Indiana. Its geographical location puts it almost exactly in the center of the state, while its designation as the capital city makes it home to dozens of unique museums, colleges, art venues, historic sites, and parks.

(THE CHRIS SPANGLE SHOW) I recently moved downtown in Indianapolis and frequently walk by the home of Benjamin Harrison, who was the 23rd president of the United States from 1889 to 1893. I became curious about the man and his time in office and looked into him, and he cared deeply about civics and what makes a community work well. Charlie Hyde is the President & CEO of the Benjamin Harrison Presidential Site, and he joins me to discuss his legacy as President, how he was shaped by his service in the Civil War, and what the staff at BHPS is doing to pass on his values in the next generation through the Future Presidents of America program.

(CURRENT) Since Indianapolis is the Crossroads of America, Candlelight Theatre’s playwright in residence James Trofatter figures the Benjamin Harrison Presidential Site is a good place for ghosts to converge.

“An American citizen could not be a good citizen who did not have a hope in his heart.” Benjamin Harrison