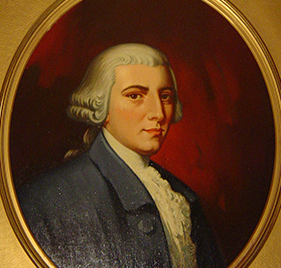 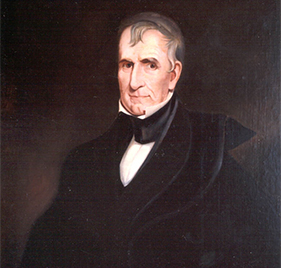 In 1764, when the House defied the Royal Governor and passed the Stamp Act Resolutions, the Governor tried to bribe Harrison with an appointment to the executive council. He refused the appointment and instead declared a devotion to republican principles.

Elected to the Continental Congress in 1774, he was one of a party of representatives who, the following year, attended General Washington in Cambridge to plan the future of the American Army. He had reservations about the Constitution, a document which seemed to promote kingly power while increasing the mistrust between southern and northern countrymen. A slave owner himself, his great-grandson would be a Union soldier 80 years later.

He was elected Governor of the State of Virginia in 1782. He retired from the Governor’s office after five years of service.

William Henry Harrison, Benjamin Harrison’s grandfather, obtained a commission as ensign in the First Infantry of the Regular Army, and headed to the Northwest. In the campaign against the Indians, Harrison served as aide-de-camp to General “Mad Anthony” Wayne at the Battle of Fallen Timbers, which opened most of the Ohio area to settlement.

In 1798, he became Secretary of the Northwest Territory.

In 1801, he became Governor of the Indiana Territory, serving 12 years. The Battle of Tippecanoe, upon which Harrison’s fame was to rest, disrupted Tecumseh’s confederacy but failed to diminish Indian raids.

In the War of 1812, Harrison won more military laurels when he was given the command of the Army in the Northwest with the rank of Major General.

The Whigs nominated him for president in 1840. He won, but before he had been in office a month, he it is suspected that he developed pneumonia and died – however, history is looking at other causes.

From 1853 to 1857, he served in the United States Congress in the House of Representatives as a Whig from Ohio. This was a tremulous time, and John Scott stood firm on issues like the Kansas-Nebraska bill. He believed that it was necessary for mutual forbearance and compromise, in order that the Union might be saved.

John Scott retired from politics and return to his estate at North Bend, OH.

In the summer of 1877, nationwide strikes by railroad workers erupted into riots in cities across America, including Baltimore, Pittsburgh, Buffalo, Chicago and San Francisco.  Indianapolis was spared this violence thanks in part to Benjamin Harrison.  When Hoosier rail workers walked off their jobs on July 23, Harrison and his former law partner Albert Porter intervened as representatives of the newly formed Committee of Mediation. They were able to bring the dispute to a peaceful resolution.  Harrison’s success, followed by the death of former Governor Oliver Morton, made him the unofficial leader of his party.