Q&A with our VP of Education Roger Hardig

Q&A with our VP of Education Roger Hardig

He has been involved with the Benjamin Harrison Presidential Site for about 30 years. He started as a weekend docent when he attended the IUPUI School of Education. After a year working as an education assistant to the director and short period of time as a co-director, Roger Hardig became the VP of Education — what was then called Director of Education —in 2000. He has orchestrated education programming for both children and adults. See what he has to say about working with the Presidential Site and leading programs like Future Presidents of America and the In Pursuit of State Pride field trip. 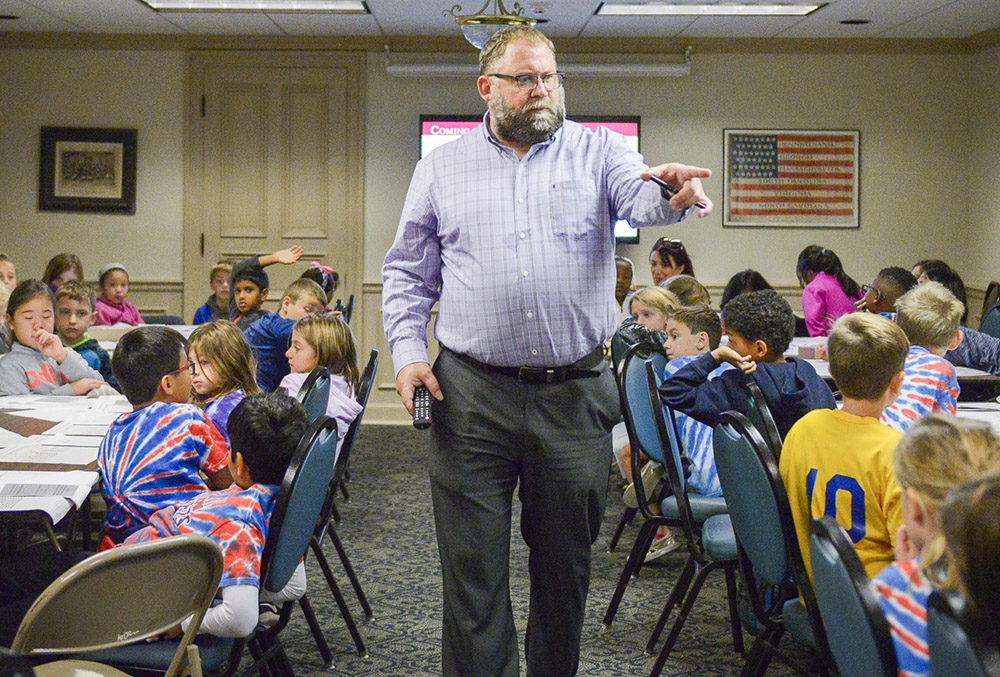 Q: How did you get involved with the role at the Presidential Site?

A: Because of my upbringing, I was always in museums. My parents always traveled for work, but no matter where we were, we always made time for museums… I’ve always had this natural interest in history. I remember as a young kid, I was given book about presidents — after visiting the [Dwight D.] Eisenhower Presidential Library & Museum in Kansas, I believe. I became obsessed with the history of presidents. [Museums] accrue all these artifacts and have always been reminders to me that we are not alone. There were people before us who were going through the same things we are now. 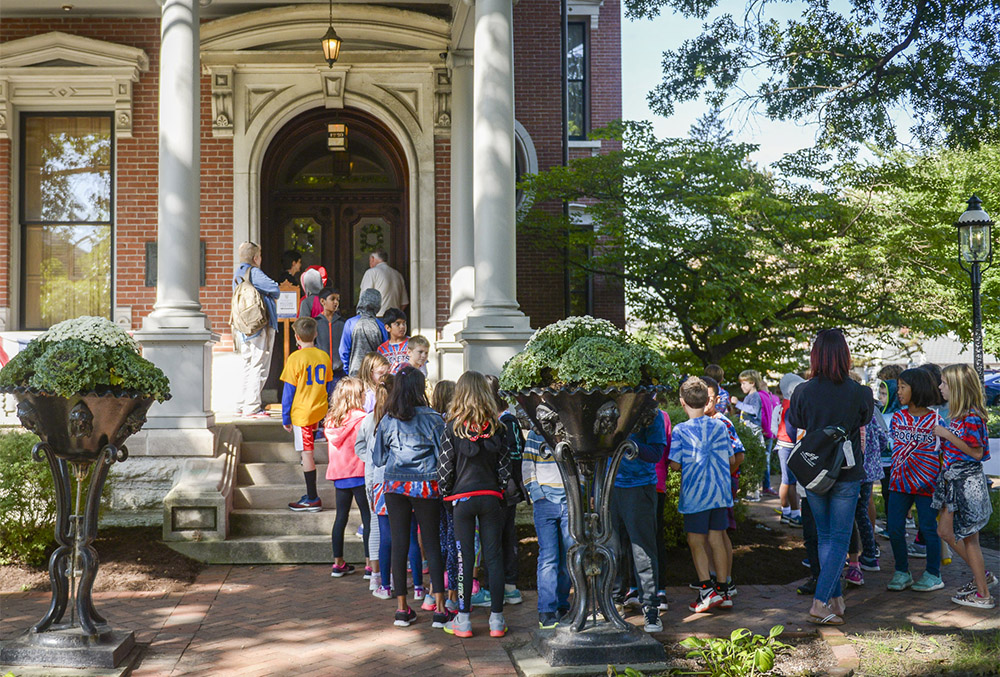 Q: A great deal has likely changed in the 25 years you’ve been with the Presidential Site. What are some of the most recent initiatives you have carried out?

A: The biggest one of my time has been the In Pursuit of State Pride field trip, which was a set up to the bicentennial. It’s a three-way field trip between us, the Indiana State Tour Office and Indiana State Library. It’s  for all fourth graders in Marion County, and I solely administer it. That, to me, has been one of the most important things, because it has removed the barriers from education. It’s no cost to the school systems. The tour doesn’t cost. We take care of transportation. For a lot of school systems with little money, we’ve been able to serve them. Because of financial issues, we lost a lot of schools in the past. So, to be able to do this has made me very happy.

Q: Outside of field trips and classroom visits, the Presidential Site also offers youth leadership programs. Can you share a memorable anecdote from one of those programs?

A: There’s been so many. Every [Future Presidents of America] class has been special and unique; each group takes on their own character. One of the coolest things to me was the wreath laying on Benjamin Harrison’s grave at Crown Hill Cemetery. After that part, we go and sit on the highest point of the grounds and look out at the city, and the kids write an obituary for Harrison. Just some of the creative writing that has come out of that is amazing. I also get to meet kids from all walks of life. It’s funny because one of the students asked me do a letter of recommendation for him, to talk about everything he had learned and things like that. But the students have taught me more than I could ever teach them. With the field trips, you have a finite amount of time with them. You have to relay your entire message with a time limit. But with Future Presidents, you get to really dig in, have debates and discussions. So, there’s learning on both ends, and that’s really, really cool. 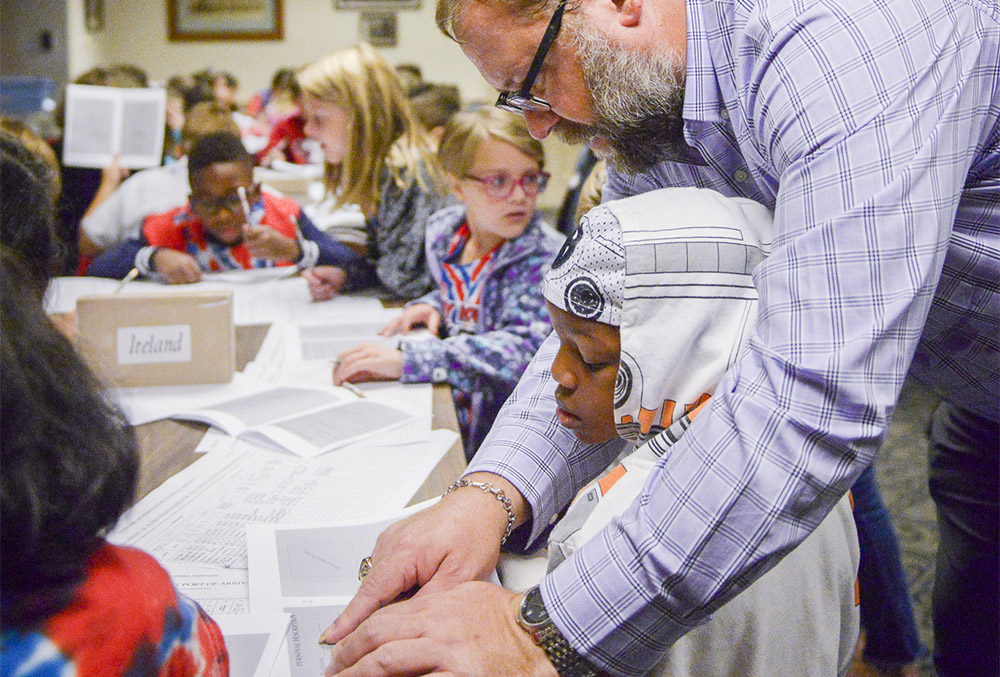 Q: What has been the most rewarding part during your time as VP of Education?

A: Probably getting to know and be a part of the growth of so many dynamic people. One of my past interns graduated from NYU and now works in Washington, D.C. Another is a pediatric doctor on the east coast. Another has Pentagon clearance. Just getting to be a part of that and teaching the Future Presidents kids has been so rewarding. One thing that has always challenged me is trying to take subjective information and make it objective information that a 9 year old can understand. I do agree with that old statement that if you can’t explain what you’re thinking, you probably don’t understand it yourself… [It’s about] getting people to see there is a place for them. We do matter. We’re not alone. We can look back to figure out what we’re supposed to do going forward. One of the unique things about us, is that we do programming by appointment. I encourage teachers, if they have time and are looking at our website and there’s a program they are interested in, don’t be daunted by anything. That’s the beauty of trying to be flexible. We’ll work on anything. Seeing the house, the artifacts speak for themselves and you can’t replace that. But if that’s not possible — I understand all the reasons why — I will pack my stuff and come to them.

This is the first installment in our National Education Month 2018 series. Read more about our education programming by visiting the education section on our website. If you have questions about this post, or ideas for future posts, let us know by emailing blog@bhpsite.org. Back to Top