John Scott Harrison, father of 23rd President Benjamin Harrison, passed away on May 25, 1878. Four days later, he was buried at this resting place near Augustus Devin, Benjamin’s 23-year-old nephew who had died about a week earlier. But during the burial, attendees noticed something a little off about Augustus’s grave. It had been robbed.

This sparked concern among Benjamin and his brothers, John and Carter. To ensure their father’s grave remained untouched, they reinforced the brick-vaulted grave by placing three large stone slabs over the casket, followed by the pouring of cement on top of that. The Harrison brothers hired a watchman to guard the grave for the first month after the burial.

Benjamin returned to Indianapolis late in the day after the funeral; he hoped to finish his address that was to be given at the Republican State Convention on June 5. The rest of the family departed as well, except for John and his cousin, George Eaton. The two acquired a search warrant and, with the assistance of local Cincinnati officers, went looking for Augustus’s body. First stop: the Medical College of Ohio.

Throughout the 1800s, it was common for medical schools to steal recently buried bodies and use them to practice surgical procedures.

The search party scoured the school, led by janitor A.Q. Marshall. Room after room, George and John came out with no new discoveries. Near the end of the search, the janitor led the party upstairs to a room with a windlass and rope that exited through a hole in the floor.

Upon further inspection, it seemed this device was used to lift cadavers to other floors of the building.

One of the men in the search party, Constable Lacey, noticed the rope to the device was pulled tight — as if there were something at the other end. He ordered a detective to haul the device to the service. Slowly and strenuously, he pulled the rope, eventually pulling a bare body to the surface. George and John initially rejected the finding, as the body was clearly that of a relatively old man, not one in his early 20s. The detective insisted, nonetheless, to lift the cloth from the face of the body. It was not Augustus Devin, that was clear. But the look on John’s face told of another, more shocking discovery.

A windlass is a device used today to hoist ship anchors. In the past, it was used to lower and raise buckets from wells. This illustration from The Harrison Horror by Harry J. Sievers shows a diagram of the device John Scott Harrison was found hanging from.

Upon receiving a telegram of the finding less than 24 hours after arriving home, Benjamin Harrison acted immediately. He contacted the Pinkerton Detective Agency to conduct a private investigation. Benjamin boarded a train to Cincinnati and, once more news reached Indianapolis, Russell Harrison released them to the press. The Cincinnati Daily Star and a Plymouth, Indiana, newspaper — the Marshall County Republican — reported on the incident. News even stretched to Wisconsin, where an article was published in the Janesville Daily Gazette. 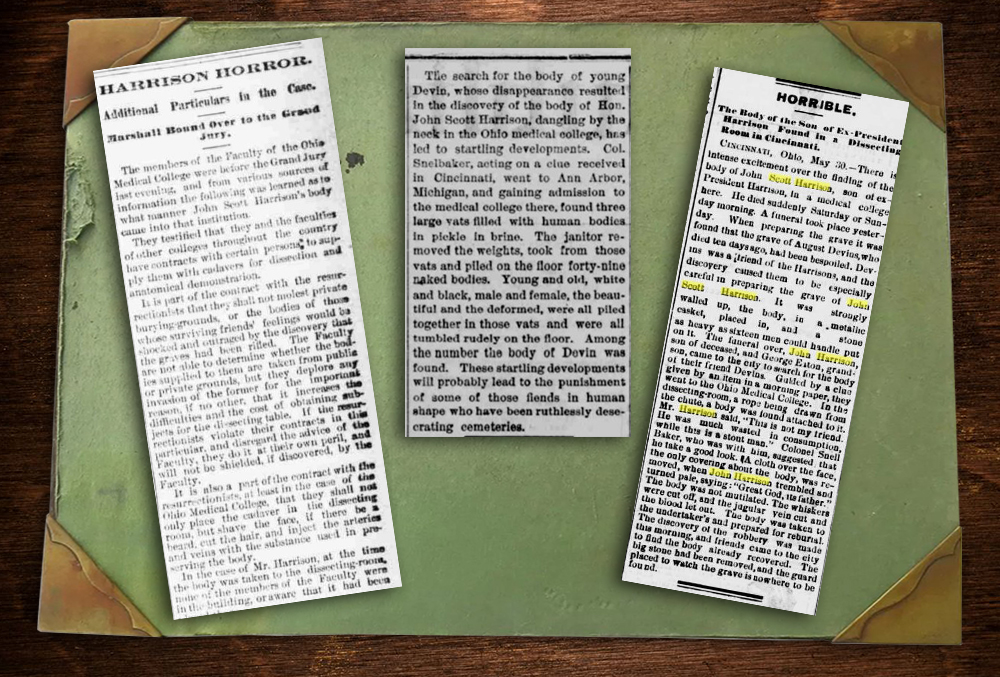 Benjamin reached Cincinnati and called for the arrest of A.Q. Marshall. The janitor was later taken in on charges of receiving and concealing the body of John Scott Harrison, but shortly after the arrest, the medical college posted the $5,000 bond. This angered Cincinnati citizens, who suggested mob-like action to take on the medical college. Benjamin vetoed this idea, and as a response to the release of A.Q. Marshall, issued a response on June 1. Part of the open letter reads:

“We have been offered through the press the sympathy of the distinguished men who constitute the faculty of the Ohio Medical College. I have no satisfactory evidence that any of them knew whose body they had, but I have the most convincing evidence that they are covering the guilty scoundrel… The bodies brought there are purchased and paid for by an office of the College. The body-snatcher stands before him and takes from his hand the fee for his hellish work. He is not an occasional visitant…” 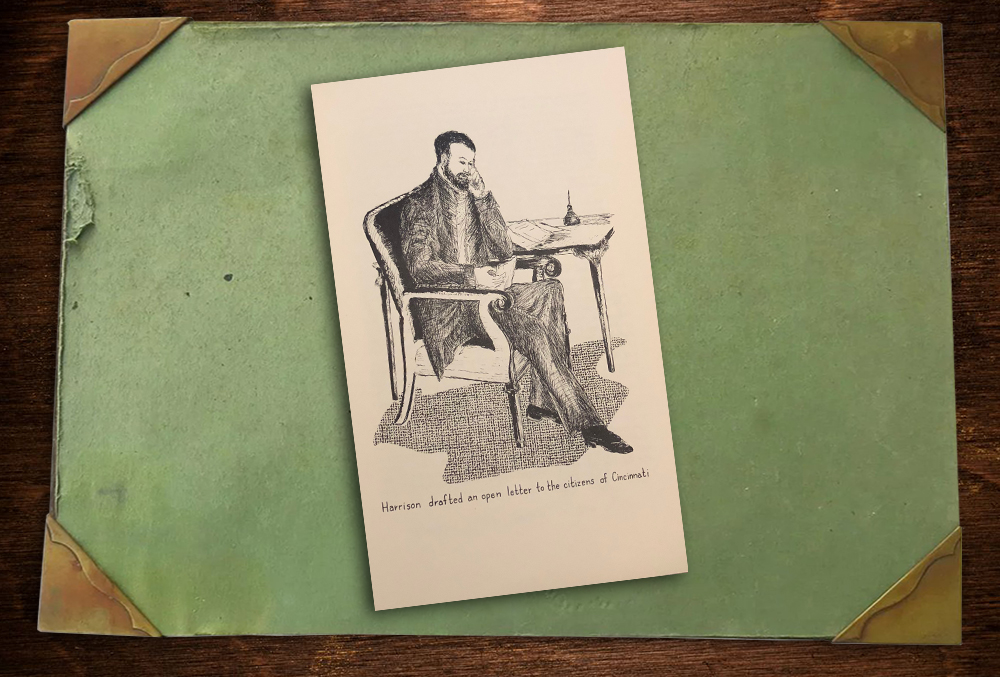 An illustration from Siever’s book of Benjamin Harrison writing the open letter to the citizens of Cincinnati.

Benjamin Harrison made it clear he would exhaust any resources to find Augustus Devin’s body, which was uncovered at the University of Michigan. John Scott Harrison was was later re-interred in a family friend’s vault at Spring Grove Cemetery just outside of Cincinnati.

Information gathered from The Harrison Horror, a chapter in the second volume of the biography of Benjamin Harrison, by Harry J. Sievers. Information also gathered from The Library of Congress newspaper archives and “The Body-Snatching Horror of John Scott Harrison,” an article published by MentalFloss. Back to Top