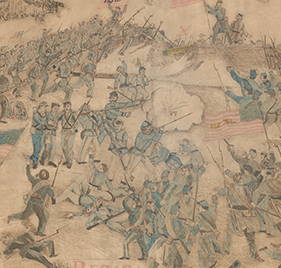 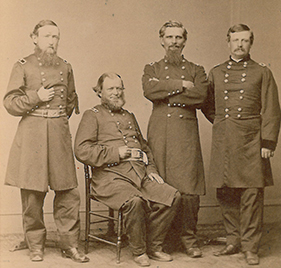 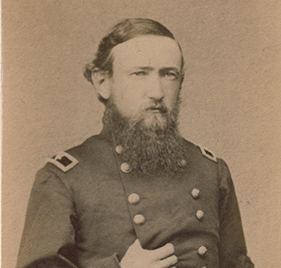 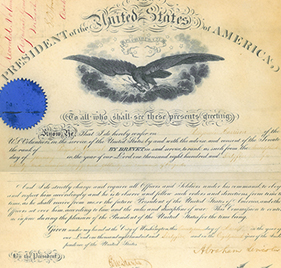 On July 1, 1862, a full year after the bombardment of Fort Sumter, President Abraham Lincoln appealed for an additional 300,000 men in the Union Army. Along with 17 other governors, Governor Oliver P. Morton of Indiana pledged to aid in the call for reinforcements. Morton was having difficulty filling the Indiana quota of troops. It was during this period of time that Benjamin Harrison and a friend found themselves in the Governor’s office on business. Morton asked the men to join him in his inner room at the conclusion of their business.

Morton shared his concerns about raising troops; he was quite depressed at the people’s slow response. Harrison felt that he was addressing him personally. Harrison was so moved that he offered: “Governor, if I can be of any service, I will go.” Morton immediately asked him to raise a regiment, but felt that it was asking too much for Harrison to go into the field of battle and offered that they would find someone to command the regiment. Harrison had just been elected Reporter of the Supreme Court.

Harrison, however, rejected the idea of asking men to join a regiment and then staying home himself. Harrison answered that if he made any speeches, and asked men to go, he proposed to go along with them, and stay as long as they did, if he lived that long. However, he did not feel that he should be in command of the regiment, as he did not have any military background.

In response to this pledge, Harrison volunteered to raise a regiment. The new soldiers put into camp on the west side of Indianapolis and began their drills. Harrison employed a drill master from Chicago using his own funds to train the men. Harrison was given a commission as Second Lieutenant, and two weeks later was promoted to captain.

The men remained in camp drilling for about a month. When the regiment was complete Governor Morton gave Harrison the commission of Colonel. By August 8, 1862, the newly appointed Colonel Harrison raised 1000 recruits.

On August 15, the 70th Indiana arrived in Bowling Green, Kentucky, where Harrison faced the task of turning raw recruits into seasoned troops. By day, he marched and drilled his men; by night, long after taps had sounded, he studied and perfected himself in the tactics of war.

Discipline would prove to be one of Harrison’s most arduous tasks. Company E, led by Captain Meredith, was especially challenging. Harrison wrote to his law partner, William Fishback, that two corporals had been “broken,” with one lieutenant arrested, and many of the squad in the guardhouse. “They are beginning to know me now.”

Captain Meredith was anxious to reform and Harrison gave him the chance. Meredith served with distinction for the duration of the war. Harrison’s reputation became that of a strong leader. He earned the respect of his men and did not leave them in battle. The men learned that he stood by his word and was always concerned with their well-being. Harrison knew that they would have to be disciplined to survive battle.

Harrison did not ask more of his men than he did of himself. Mr. Richard Smock remembered an incident while they were camped near Nashville during a very cold winter. Men on the picket line were nearly frozen to death, and Colonel Harrison fixed coffee and took it to them in the middle of the night. Harrison always led the men saying “Come on, boys!” as he took the lead.

The 70th Indiana was assigned to guard the railroads in Tennessee until February 1863. They then served picket duty at Gallatin. In August 1863, they moved to Nashville to guard trains to Chattanooga and provided picket duty, leaving in February 1864 to join the Atlanta Campaign.

In May 1864, Colonel Harrison and the regiment joined General Sherman’s Atlanta campaign in the Army of the Cumberland. For Harrison’s achievements at the battles of Resaca and Peachtree Creek, he was promoted to Brigadier General.

During the spring of 1864, both the Union forces under Sherman and the Confederate forces under Johnston were preparing for a battle near Ringold, Georgia, on the Chickamauga River. This conflict never materialized, but it caused great anxiety on both sides. To get into position for the first general engagement of the Atlanta campaign, both sides attempted to outflank each other.

Col. Harrison’s 70th Indiana Volunteer Regiment was sent across the Chickamauga battleground, where they reached the Lee and Gordon’s Mills on May 1, 1864. Grant had set May 5th as the day to move on the Confederate lines by both the Army of the Cumberland and Sherman’s Army. Harrison was attached to Sherman’s command.

On May 5th, Harrison wrote to his wife Caroline of the move:

“In front of my saddle I have my blue coat rolled up and strapped on. The small cavalry saddle bags are filled to their utmost capacity . . . my little tin bucket for making tea, swings clattering at my side. The bundle behind my saddle is so large that it is a straining effort to get my leg over it on or off and when in the saddle I feel like one who has been wrapped up for embalming . . . it is very disagreeable.”

The enemy was engaged at Tunnell Hill and Rocky Face Ridge but fell back to Resaca. On May 13, 1864 Harrison moved toward Resaca. The first day of fighting occurred on the 13th; Harrison was not to participate in the fight until the next day. On the evening of the 13th, Harrison wrote to Caroline of his feelings on the eve of his “first great battle“:

“I am in my usual good spirits, though not at all insensible to grave responsibilities and risks which I must bear tomorrow. I am thinking much of you and the dear children and my whole heart goes out to you in tenderness and love and many earnest prayers… I send up to God this night that should you lose a husband and they a father in the fight that you may find abundant consolation… I know you will not forget me… but let your grief be tempered by the consolation that I died for my country and in Christ. If God gives me strength I mean to bear myself bravely, and come what will, so that you may have no cause to blush for me, though you should be forced to mourn.”

A Confederate artillery battery posted in a breastwork proved particularly annoying. Brigadier General Ward’s brigade, of which Harrison was a part, was ordered to assault and capture this redoubt. The brigade attacked in a column formation, the 70th having the honor of leading the charge. The redoubt was heavily fortified with three infantry regiments in the rifle pits and four more regiments in the main trenches.

Coming out of the woods, Harrison surprised and drove back the outlying infantry. Despite the deadly close range of the cannon fire, Harrison captured the battery in hand-to-hand fighting with the gunners. Fierce fighting continued all afternoon. At nightfall, the 70th carried the four captured 121-pound Napoleon Cannons to the rear, keeping them safe from recapture. The Confederate forces withdrew in the darkness of the morning of the 15th.

Harrison received orders to report to Governor Morton for special duty. The next several weeks in Indianapolis were spent campaigning both for himself as Indiana’s Supreme Court Reporter and President Abraham Lincoln.

After the November election, he left for Georgia to rejoin his old regiment for Sherman’s “March to the Sea.” Instead he was given command of the 1st Brigade at Nashville and led them in a decisive battle against Confederate General Hood.

A few weeks later, he received orders to rejoin the 70th Indiana at Savannah, Georgia, after a brief furlough in Indianapolis. However, Harrison contracted scarlet fever delaying him by one month, and then spent the next several months training replacement troops in South Carolina. After the South’s surrender, he reached his old regiment on the same day as the news of President Lincoln’s assassination.

On April 29, 1865, the regiment was ordered to march to Washington, DC. It participated in the Grand Review of Western Armies held on May 24, 1865. General Harrison and the 70th Indiana were mustered out of Federal service on June 8, 1865.

Years after, Harrison participated in many Civil War reunions and during his presidency was a champion of providing pensions for Grand Army of the Republic veterans.