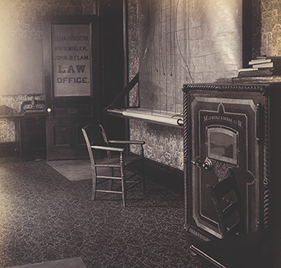 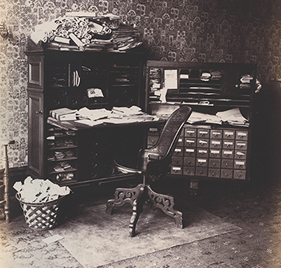 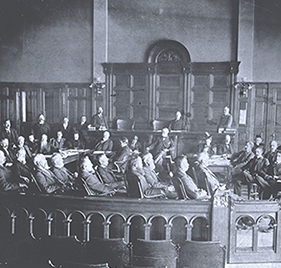 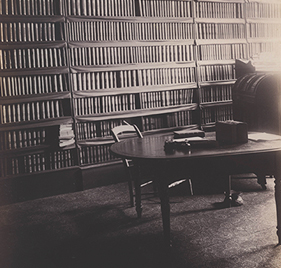 In 1860, Benjamin Harrison was elected Supreme Court reporter, and according to his own account, the only political office he ever voluntarily sought. He valued the information he gained from his position and considered it equivalent to a postgraduate education in law. Returning to Indianapolis after his service in the Civil War, Harrison was filled with plans for renewing family relationships, re-establishing his law practice and returning to his office of Supreme Court reporter. The firm of Porter, Harrison, & Fishback was formed.

In 1868, the double murder at Cold Springs of businessman Jacob Young and his wife shocked Indianapolis. Among those charged with murder was Nancy Clem, wife of a respectable grocer who was allegedly in debt to Young.

The first trial resulted in a hung jury and in the second trial, Harrison personally took over the prosecution. He called more than 250 witnesses and established that Mrs. Clem’s alibi witness was bribed. In his final argument, Harrison held the jury for eight hours. He described the murder scene and talked of the orphaned Young daughter saying:

“It was a scene to freeze one’s blood… Not only dead but burned!… The little orphan left at home waited in vain for their return that night. How slow… the moments must have passed.”

The jury deliberated for 48 hours and came back with the verdict: “Guilty of murder in the second degree.” She was the first woman convicted of murder in Indiana. The case attracted national attention.

In 1870, Harrison was with the firm Porter, Harrison, & Hines. He was appointed by President Grant to defend General Alvin P. Hovey and others in a suit for damages brought by Lambdin P. Milligan before the United States Circuit Court in 1871.

Milligan had been found guilty in 1864 of antiwar activities and sentenced to death by a military commission in Indianapolis. In 1866, the Supreme Court overturned the ruling basing the decision on the fact that Milligan was a private citizen and should have been tried by a civil court not a military court.

Milligan filed a state suit claiming false arrest and imprisonment. Defendants in the case included former Indiana Governor Oliver P. Morton and General Ulysses S. Grant, who was president at the time. This case was one of the first civil rights trials seeking monetary compensation for violations of the Constitution.

Harrison’s tactic was to get on record the whole story of the treason committed by Milligan. His appeal was not against the letter of the law, but for mitigation in the interest of real justice. Law was sacred to Harrison, yet truth and justice were supreme; Harrison was a great constitutional lawyer. He never tried to bully witnesses or coax juries. He presented the facts in a pleasant and businesslike manner.

Harrison’s argument showed the blatant treason in such a glaring light that damages were reduced to $5 and cost. This was a slap in the face to Milligan; he apparently never collected. Milligan’s attorney was Thomas A. Hendricks, who would later become Governor of Indiana and then Vice President under Cleveland in 1884.

Harrison tried fifteen cases before the U.S. Supreme Court and one before the International Tribunal in Paris. While Harrison and Hendricks were opposing counsel in the Milligan case in Federal Court, they were also on opposite sides in the U.S. Supreme Court Case New Albany v. Burke. Harrison represented the city while Hendricks represented Burke and other taxpayers in New Albany. A Federal Court had issued an injunction requesting that the taxpayers be paid interest from the city on bonds issued to construct a railroad. The U.S. Supreme Court reversed the ruling, thus this was Benjamin’s first prevailing win before the nation’s highest court.

In 1874, William Henry Harrison Miller replaced Porter in the firm. Then Mr. Hines retired and was replaced by John Elam. The firm became Harrison, Miller, & Elam.

Harrison lost the case of Burke v. Smith, an issue of whether stockholders in the Indiana railroad corporation could be held liable for amounts in excess of the face amount of the stock. The company had become insolvent and wished for the stockholders to pay more. Ben argued for the railroad, and the subscribers were represented by Michael Kerr. Appearing in the case with Kerr was James A. Garfield, probably making this the only time two future presidents were opposing counsel in the same case.

In 1881, Harrison was elected by the Indiana General Assembly to the U.S. Senate. While senator, he argued six cases before the Supreme Court. Over his career he enjoyed mixed success in his Supreme Court arguments. The cases involved constitutional questions on the taking of private property for public use, the right to determine municipal boundaries, and inheritance tax laws.

Harrison agreed to be plaintiff’s counsel in a complicated will trial over the estate of James Morrison in Richmond, Indiana, in 1895. The estate in question was worth over $600,000 plus real estate. Harrison collected a large fee. During the trial the opposing counsel accused Harrison of using his status of ex-president to influence the judge and jury.  Harrison rebutted:

“I assert there is no ex-President in this case. I am here to discharge the sworn duties of my profession as I see them. If the people of this country have seen cause to honor me, it is no reason why I should not appear in the capacity of counselor nor a reason why I should be driven from this court.”

In 1899, Harrison was selected as senior counsel to represent Venezuela before the court of arbitration in Paris. It was a border dispute between Great Britain and the Republic of Venezuela. The long time dispute was over the border between Venezuela and British Guiana. Tensions rose between Britain and the United States over the issue. The United States, wanting to invoke a new and broader interpretation of the Monroe Doctrine, pursued arbitration. Britain eventually conceded to Washington’s demands, a symbolic concession that America had become a dominant power. The American commission was appointed, and the line that was finally drawn in 1899 favored Great Britain.

In his last case before the Indiana Supreme Court in 1900, a closely divided court supported his argument for the purposes of bonding limitations in Indiana’s constitution. It found that city and school corporations were separate, giving school corporations much greater authority. This case was an important legacy to the development of the public education system in Indiana.